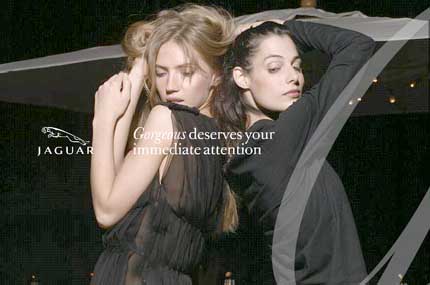 Ever since I covered the new Jaguar XK in Lucire’s print edition about three months ago, I have been in love with the car. Ian Callum’s styling is impressive, especially as it’s the culmination of a dream he has held since he was a boy: to create his own Jaguar from concept to release.
It’s getting plenty of below-the-line coverage (such as in Lucire’s recent ‘The Car to Be Seen in’, which I chair), which is why I think its latest campaign, covered by Frederik Samuel at the Advertising/Design Goodness blog, is a clever one. The ads focus on the word gorgeous and hardly show the product. Frederik doesn’t like them, but I do.
They make sense to me: consumers are more cynical and sophisticated. They don’t need to be shown a product that is already getting a lot of attention (with more to come as it is released, market by market). If anything, showing the product makes it all duller. Most western car buyers surf to get more info. And, ﬁnally, a car is a fashion item, especially when it comes to XK Jags. People buy into a lifestyle, and Jaguar needed to deﬁne that as more future-looking than the image it presently holds (with the likes of Arthur Daley and John ‘Two Jags’ Prescott being its proponents).
At least it isn’t that ‘new Jag generation’ campaign which had Sting ﬂogging X-types, a car that appealed mainly to the ‘old Jag generation’.
Too-thin supermodel types and the Jaguar leaper have their place, and they work together beautifully here. Buying a Jaguar XK is about an image, so why not play on the fantasy ﬁrst, provide the setting, and allow the customer to ﬁll in the gaps with his or her own little adventures?
The campaign is at this link, including videos. posted by Jack Yan, 10:55 PM  permalink
Comments:
I saw the car in the flesh at the LA Auto Show. It's boring and forgettable (and I love Jags). The only thing worse than the car is the campaign - an unlovely car being called gorgeous by its maker is a pathetic state of affairs. Wait til someone buys it, then let them call it beautiful.
# posted by

There is one angle that I didn’t mention as it is generally only relevant to the Brits: ‘Gorgeous’ as a term, addressed to someone, either male or female. It has a slight overtone of that humour. But in other countries this does not translate—and in such cases, I do agree that it is better for the public to label the car with such an adjective than its manufacturer. While I like global campaigns, there are hitches such as this.
# posted by

any ideas where I can find the text for this campaign?
# posted by

Bruce, I don’t have the print version but the web site is at www.prefergorgeous.com.
# posted by

I realy like this one its about time that they braught some fashion in to them!
# posted by